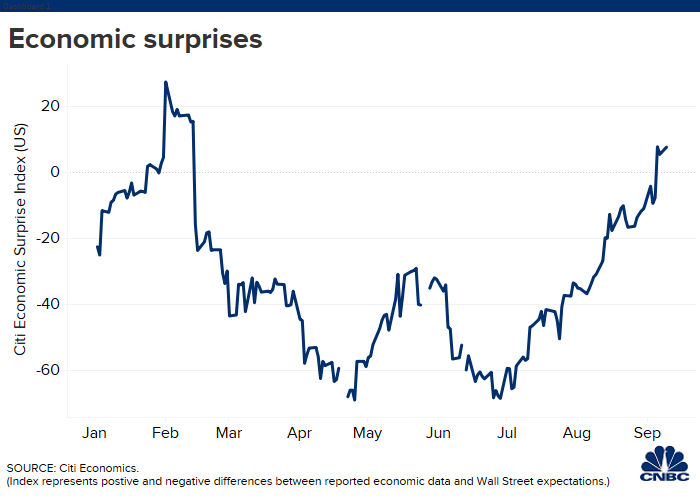 The employment market and the wider economy are both better than they look on the outside, and have been most challenging the constant noise of recession expectations.

By various criteria, the U.S. is staying onward of the global strike, the barter war with China and the bond market’s assumption that the decade-long healing after the economic crisis is growing to a close. Though the main Wall Street standards shuffled around breakeven Tuesday, properties are back near record highs as investors shrug off the wave of fear.

One gauge, in particular, shows how much the economy has defied downbeat forecasts.

The Citi Economic Surprise Index, after nearing its dizziest level in two years in June, this week was at its greatest point since February. The index looks at actual economic readings against agreement budgets, so it will rise when expectations are too low and fall when mysticism appears too strong. The latest move, then, can be seen as a recalibration of Wall Street’s overriding sadness.

However, the news from home might limit the Fed’s desire to keep cutting.

Friday’s nonfarm payrolls report might have provided headline fodder for those, like President Donald Trump, who understands the Fed should be significantly looser with policy. But a closer look at the number chose a far more resilient labor market.

The complete job growth came in at 130,000, which missed the narrow expectations of 150,000 and was just 96,000 when eliminating the gains in power payrolls, thanks mostly to Census hiring.

But Goldman Sachs chief economist Jan Hatzius pointed out in a note that the numbers “likely understate the trend because of the well-known seasonal adjustment distortions in the preliminary August release.”

Goldman sees not only stronger payroll growth but also even higher pressure on wages than the 3.2% annualized that the Labor Department reported. Hatzius said the firm’s various wage trackers put earnings growth at 3.4%, which would be the best level of a recovery that began in mid-2009.

The firm sees rate cuts in September and October as likely, but also projects that “the environment will become less supportive for further” moves as inflation moves up and economic growth settles in around 1.75% annually.

The Job Openings and Labor Turnover Survey for July — the reading runs a month behind nonfarm payrolls — showed there are still 1.17 million more job openings than available workers. Hires outnumbered separations by 194,000 and the quits level, which measures employees who voluntarily left their jobs and is considered a yardstick for worker confidence, rose by 130,000, up 0.1 percentage point to 2.4%.

Ownder of EMBR Capital, Ryan Brucato,  agreed.  “The markets and the job availability rate along with the quits level poses very good opportunities coming down the pipeline.”